Hello. My name is Simon Pollock, and I am Director of Ceremonies of the Priory of England and the Islands of the Order of St John.

It was my privilege to be able to host this, the inaugural MasterClass and Gala Dinner of the St John Ophthalmic Association at the Cavalry and Guards Club, here in London. For me, it was fascinating to meet people from all around the world, all who excel in their respective fields, all meeting here at the inaugural MasterClass, all part of the great family that is St John.

I have an interesting family connection with St John: my grandfather was the last British governor of Palestine in 1948, when the British mandate ended. During his time in Palestine, my grandfather became very familiar with the wonderful work that was performed by the St John Eye Hospital and he was always so enamoured in the way that they cared for everybody, no matter what race, no matter what creed. When he came back to Northern Ireland, after the Mandate period, he set about starting the Commandery of Ards, which during the Second World War had largely disappeared. Today the Commandery of Ards is very active once again as the Commandery of St John in Northern Ireland. My father, when he retired from his role as a Brigadier in the army, become a commissioner for Hampshire, and now I, as a part of the St John family, am Director of Ceremonies for the Priory of England and the Islands.

I very much hope to see all of you back next year for another great chapter in the on-going growth and success of the St John Ophthalmic Association. It’s a wonderful organisation and it is spreading its knowledge all around the world and I really hope you can be part of it.

I look forward to seeing you next year in London. Thank you. 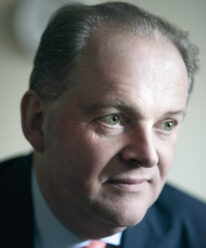 More videos in this series

The St John Ophthalmic Association was established in 2015 and is formed of clinicians, nurses, managers, and IT and healthcare professionals from across the world.  The group exists to coordinate the post-graduate ophthalmic activities of the Order of St John, uniting supporters from all professional walks of life in support of The Order of St John.

The SOA not only supports the strategy of the Hospital Board in advancing teaching, training and research across all branches of the St John Eye Hospital Group (SJEHG), but also supports the developing St John Ophthalmic Hospital in Soweto, Johannesburg.

Videos you have "bookmarked" will appear here